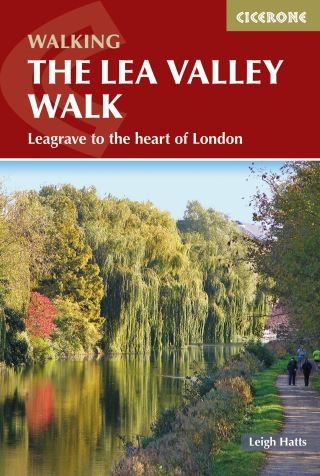 Leagrave to the heart of London

Guidebook to the Lea Valley Walk, a 53-mile long-distance path from Luton to the Thames. It follows the River Lea from its source near Leagrave to East India Dock opposite Greenwich, with an alternative finish at Limehouse and an optional tour of the Olympic Park. On the way it passes through a blend of quiet countryside, nature reserves and urban landscapes. The Lea Valley Walk offers level, waymarked walking for all abilities. The complete trek is presented in nine stages, accompanied by clear OS mapping, with suggestions for three, four, five and six day itineraries. For those looking for an easy-to-access traffic-free day or half-day walk, the route is divided into sections with convenient railway stations close to each end. Tracing the river as it passes through Bedfordshire and Hertfordshire towards the bustle of London, this fine and varied walk takes in historical towns and villages, stately homes and castles, including Waltham Abbey and Hertford Castle, Luton Hoo, Brocket Park and Hatfield. Along with suggestions for refreshment stops and accommodation, the guidebook is packed with fascinating snippets of information about wildlife, landscape, history and industrial heritage, making it an ideal companion to exploring the river and its surroundings.

Leigh Hatts: Leigh Hatts has been walking the Thames towpath and exploring the river and Docklands since 1981, when he worked on the Thames Walk Feasibility Study which resulted in the Countryside Commission persuading the government to designate the 180-mile route as a national trail. In addition to writing three Thames books, Leigh spent a decade as author of the London Transport Walks Book series. He also devised the 20-mile Bournemouth Coast Path, which now links the South West Coast Path to the Solent Way to create a 652-mile coast route from Minehead to Emsworth. In addition to a guide to this route, he has written walking books featuring Dorset's coast and countryside and the New Forest. Leigh has also worked as a reporter for the walkers' magazine TGO.