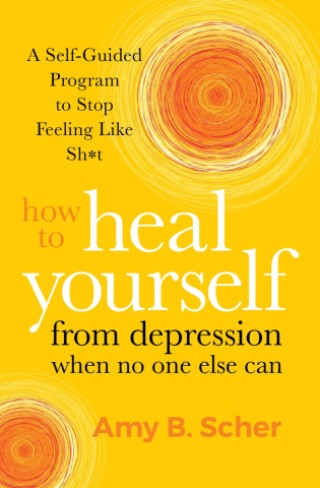 How to Heal Yourself from Depression When No One Else Can

An accessible approach to helping anyone struggling with depression to reclaim a joyful life.

From feeling exhausted or blue to not being able to get out of bed, depression happens on a spectrum and can affect anyone. Our current approach of medicine and therapy doesn't always offer all the answers.

But according to Amy B. Scher, that’s not as much of a mystery as you might think. If you’ve done everything to heal from depression but are still stuck, you’re not alone.

With How to Heal Yourself from Depression When No One Else Can, she brings her proven approach of using energy therapy for releasing emotional stress and trauma to one of the most widespread mental health challenges of our time.
In this book, you’ll:

Amy has proven that working with the body’s energy system for deep transformation is often effective when nothing else works.

Here she brings much-needed relief to anyone who wants to end the cycle of depression and rediscover the inherent wellness that resides in each of us.

Amy B. Scher:
Amy B. Scher is the bestselling author of How to Heal Yourself from Depression When No One Else Can and three other books about human-ing and healing. As an energy therapist, she helps people release emotional baggage to become their happiest, healthiest selves. Her work has been translated into 13 languages and has appeared on CNN and CBS, and in the Washington Post, the New York Daily News, Cosmopolitan, and more. Amy lives in New York City with her beautiful wife and bad cat. Most importantly, she lives by her self-created motto: When life kicks your ass, kick back. She can be found online at amybscher.com and youtube.com/amybscher.