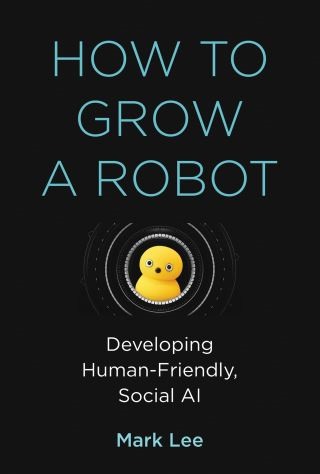 How to Grow a Robot

How to develop robots that will be more like humans and less like computers, more social than machine-like, and more playful and less programmed.

Most robots are not very friendly. They vacuum the rug, mow the lawn, dispose of bombs, even perform surgery—but they aren't good conversationalists. It's difficult to make eye contact. If the future promises more human-robot collaboration in both work and play, wouldn't it be better if the robots were less mechanical and more social? In How to Grow a Robot, Mark Lee explores how robots can be more human-like, friendly, and engaging.

Developments in artificial intelligence—notably Deep Learning—are widely seen as the foundation on which our robot future will be built. These advances have already brought us self-driving cars and chess match–winning algorithms. But, Lee writes, we need robots that are perceptive, animated, and responsive—more like humans and less like computers, more social than machine-like, and more playful and less programmed. The way to achieve this, he argues, is to “grow” a robot so that it learns from experience—just as infants do.

After describing “what's wrong with artificial intelligence” (one key shortcoming: it's not embodied), Lee presents a different approach to building human-like robots: developmental robotics, inspired by developmental psychology and its accounts of early infant behavior. He describes his own experiments with the iCub humanoid robot and its development from newborn helplessness to ability levels equal to a nine-month-old, explaining how the iCub learns from its own experiences. AI robots are designed to know humans as objects; developmental robots will learn empathy. Developmental robots, with an internal model of “self,” will be better interactive partners with humans. That is the kind of future technology we should work toward.