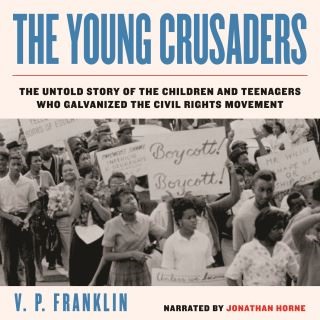 An authoritative history of the overlooked youth activists that spearheaded the largest protests of the Civil Rights Movement and set the blueprint for future generations of activists to follow.

Some of the most iconic images of the Civil Rights Movement are those of young people engaged in social activism, such as children and teenagers in 1963 being attacked by police in Birmingham with dogs and water hoses. But their contributions have not been well documented or prioritized. The Young Crusaders is the first book dedicated to telling the story of the hundreds of thousands of children and teenagers who engaged in sit-ins, school strikes, boycotts, marches, and demonstrations in which Dr. Martin Luther King Jr. and other national civil rights leaders played little or no part.

It was these young activists who joined in the largest civil rights demonstration in US history: the system-wide school boycott in New York City on February 3, 1964, where over 360,000 elementary and secondary school students went on strike and thousands attended freedom schools. Later that month, tens of thousands of children and teenagers participated in the “Freedom Day” boycotts in Boston and Chicago, also demanding “quality integrated education.”

Distinguished historian V. P. Franklin illustrates how their ingenuity made these and numerous other campaigns across the country successful in bringing about the end to legalized racial discrimination. It was these unheralded young people who set the blueprint for today’s youth activists and their campaigns to address poverty, joblessness, educational inequality, and racialized violence and discrimination. Understanding the role of children and teenagers transforms how we understand the Civil Rights Movement and the broader part young people have played in shepherding social and educational progress, and it serves as a model for the youth-led “reparatory justice” campaigns seen today mounted by Black Lives Matter, March for Our Lives, and the Sunrise Movement.

Highlighting the voices of the young people themselves, Franklin offers a redefining narrative, complemented by arresting archival images. The Young Crusaders reveals a radical history that both challenges and expands our understanding of the Civil Rights Movement.

V. P. Franklin: V. P. Franklin is Distinguished Professor Emeritus of History and Education at the University of California, Riverside. He has served as the Editor of The Journal of African American History (2001-2018) and is the author of books including Living Our Stories, Telling Our Truths: Autobiography and the Making of the African American Intellectual Tradition, and co-author of My Soul Is a Witness: A Chronology of the Civil Rights Era, 1954–1965.