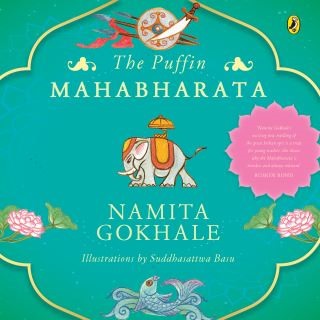 Namita Gokhale’s exciting new retelling of the great Indian epic is a treat for young readers. Older readers will enjoy it, too. She shows why the Mahabharata is timeless and always relevant’ —Ruskin Bond ‘Without sacrificing the complexities of either the narrative or the characters, Gokhale's lucid language and gentle prodding places the Mahabharata well within the reach of younger readers and listeners. She retains the anguish of the family drama at the center of the story as well as captures the epic sweep of the Great War and its bitter aftermath. Every child should know this story—how wonderful that it should be presented to a new generation by such a skilled and mellifluous storyteller’—Arshia Sattar ‘The Mahabharata is truly one of the greatest stories ever told. Namita Gokhale's rendition makes for compelling reading, because it retains the essential structure of the narrative without diluting its epic proportions. This book is the best gift for children who wish to discover and enjoy the wisdom and mythology of ancient India’ —Pavan K. Varma A long, long time ago, in the ancient lands of India, known in those days as Bharatvarsha, a family quarrel grew into a bloody war. There had been wars before, and there have been wars since, but that mighty battle between warring cousins of the Kuru clan has become a part of the mythology and history of India. Told and retold a million times, the story of the Mahabharata is about defeat as much as victory, about humility as much as courage. It is the greatest story ever told. Like a modern-day suta or storyteller, Namita Gokhale brings alive India's richest literary treasure with disarming ease and simplicity. She retells this timeless tale of mortals and immortals and stories within stories, of valor, deceit, glory and despair, for today's young reader in a clear, contemporary style.

Namita Gokhale: Namita Gokhale is a writer, publisher and festival director. She is the author of sixteen works of fiction and non-fiction. Her acclaimed debut novel, Paro: Dreams of Passion, published in 1984, has remained a cult classic and has been issued in a double edition with its sequel, Priya. Gokhale has worked extensively across genres on Indian mythology, including her retelling of the Indian epic in the Puffin Mahabharata, and her novel for young readers, Lost in Time: Ghatotkacha and the Game of Illusions. The edited anthologies Himalaya: Adventures, Meditations, Life and The Himalayan Arc: Journeys East of South-east provide valuable resource material on the culture and politics of the region. Gokhale is also founder and co-director of the Jaipur Literature Festival and of Mountain Echoes, the Bhutan Literature Festival. She is director of Yatra Books, a publishing house specializing in translation.