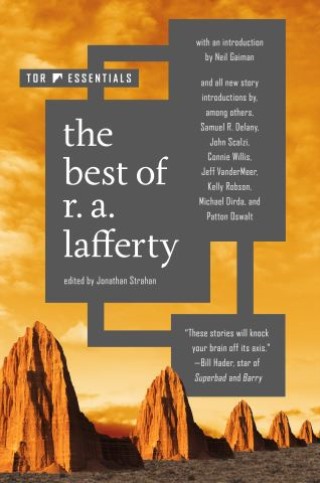 The Best of R. A. Lafferty

Acclaimed as one of the most original voices in modern literature, a winner of the World Fantasy Award for lifetime achievement, Raphael Aloysius Lafferty (1914-2002) was an American original, a teller of acute, indescribably loopy tall tales whose work has been compared to that of Avram Davidson, Flannery O’Connor, Flann O’Brien, and Gene Wolfe.

The Best of R. A. Lafferty presents 22 of his best flights of offbeat imagination, ranging from classics like “Nine Hundred Grandmothers” and “The Primary Education of the Cameroi” to his Hugo Award-winning “Eurema’s Dam.”

R.A. Lafferty: R. A. Lafferty (1914-2002) lived almost his entire life in Tulsa, Oklahoma. After service in the South Pacific during World War II, he worked as an electrical engineer. He began selling fiction regularly in the early 1960s, and went full-time as a writer in 1971. His work draws on many influences, ranging from Irish and Native American tales to the writings of St. Teresa of Avila. His novels include Past Master (1968), Fourth Mansions (1969), and the Native American historical Okla Hannali (1972).