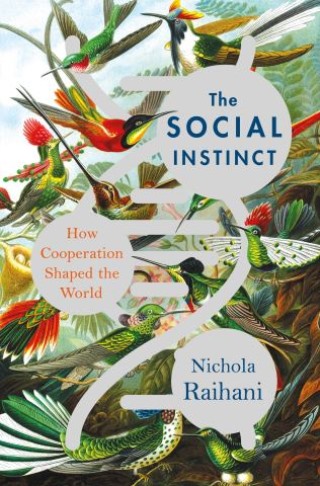 How Cooperation Shaped the World

In the tradition of Richard Dawkins's The Selfish Gene, Nichola Raihani's The Social Instinct is a profound and engaging look at the hidden relationships underpinning human evolution, and why cooperation is key to our future survival.

Cooperation is the means by which life arose in the first place. It’s how we progressed through scale and complexity, from free-floating strands of genetic material, to nation states. But given what we know about the mechanisms of evolution, cooperation is also something of a puzzle. How does cooperation begin, when on a Darwinian level, all that the genes in your body care about is being passed on to the next generation? Why do meerkat colonies care for one another’s children? Why do babbler birds in the Kalahari form colonies in which only a single pair breeds? And how come some coral wrasse fish actually punish each other for harming fish from another species?

A biologist by training, Raihani looks at where and how collaborative behavior emerges throughout the animal kingdom, and what problems it solves. She reveals that the species that exhibit cooperative behavior–teaching, helping, grooming, and self-sacrifice–most similar to our own tend not to be other apes; they are birds, insects, and fish, occupying far more distant branches of the evolutionary tree. By understanding the problems they face, and how they cooperate to solve them, we can glimpse how human cooperation first evolved. And we can also understand what it is about the way we cooperate that has made humans so distinctive–and so successful.

Nichola Raihani: Nichola Raihani is a Royal Society University Research Fellow and Professor in Evolution and Behaviour at UCL, where she leads the Social Evolution and Behaviour Lab. An evolutionary biologist by training, she won the 2018 Philip Leverhulme Prize in Psychology for her research achievements, and was elected Fellow of the Royal Society of Biology. She has also worked in the BBC Science Development Team, and appeared on several podcasts and radio shows, including BBC Radio 4’s “Hacking the Unconscious” and “Thought Cages.” She lives in London with her family.