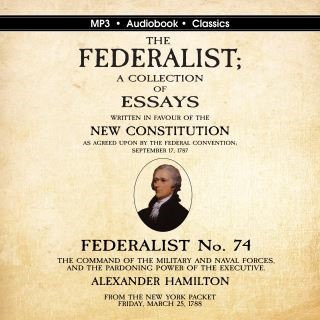 Federalist No. 74. The Command of the Military and Naval Forces, and the Pardoning Power of the Executive.

The Federalist Papers is a series of 85 articles arguing in favor of ratification of the United States Constitution by the thirteen original colonies. Federalist No. 74 discusses the powers of the president as commander-in-chief and to grant pardons and reprieves. Hamilton asserts that the role of commander-in-chief is inherent in the office itself and requires the speed and resolve of a single decision-maker. He argues that vesting such powers among multiple executives could prove disastrous in the real world of military conflict. A similar argument is made regarding the power to pardon and issue reprieves, sensing correctly that group psychology might suppress the compassion to grant mercy or the courage to uphold justice when the case seems to demand it. Interestingly, he cites the need to act swiftly to grant pardons in certain situations in order to capitalize on a fleeting possibility to resolve a difficult situation, particularly in the event of rebellion. The power to grant pardons has been controversial at times, with concerns that pardons are granted for political purposes rather than to serve justice or mercy.