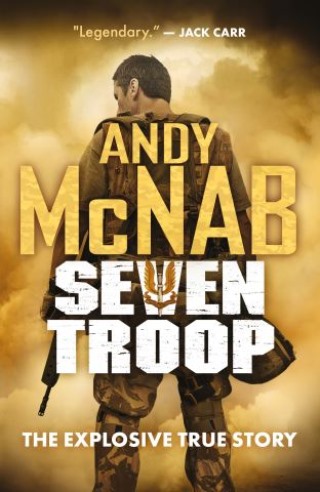 From the SAS soldier who invented the modern military memoir comes a storming battering ram of thrill-packed, unforgettable drama.

Never-before-revealed covert operations and heartbreaking human stories combine to create a new classic and a book that takes us back to where it all began… SEVEN TROOP is Andy McNab’s gripping account of the time he served in the company of a remarkable band of brothers – from the day, freshly badged, he joined them in the Malayan jungle, to the day, ten years later, when he handed in his sand-coloured beret and started a new life. The things they saw and did during that time would take them all to breaking point – and some beyond – in the years that followed. He who dares doesn’t always win…

‘Paying tribute to the soldiers he served with for 10 years, he tells the poignant story of five brave men of whom, tragically, he is the only one still alive. *****’ News of the World

‘Brutal, touching, and humorous, this book recounts McNab’s time in the SAS’s Air Troop. It made me realise that he can fight as well as write. Treading in the footsteps of Sassoon, Brooke and Owen he pretty much founded the genre of the modern military memoir.’ Professor Kevin Dutton, University of Oxford

From the day he was found in a shopping bag on the steps of Guy's Hospital in London, Andy McNab has led an extraordinary life.

As a teenage delinquent, Andy McNab kicked against society. As a young soldier he waged war against the IRA in the streets and fields of South Armagh. As a member of 22 SAS he was at the centre of covert operations for nine years – on five continents. During the Gulf War he commanded Bravo Two Zero, a patrol that, in the words of his commanding officer, 'will remain in regimental history for ever'. Awarded both the Distinguished Conduct Medal (DCM) and Military Medal (MM) during his military career, McNab was the British Army's most highly decorated serving soldier when he finally left the SAS.

Since then Andy McNab has become one of the world’s best-selling writers, drawing on his insider knowledge and experience. As well as several non-fiction bestsellers including Bravo Two Zero, the biggest selling British work of military history, he is the author of the best-selling Nick Stone and Tom Buckingham thrillers. He has also written a number of books for children.

Besides his writing work, he lectures to security and intelligence agencies in both the USA and UK, works in the film industry advising Hollywood on everything from covert procedure to training civilian actors to act like soldiers. He continues to be a spokesperson and fundraiser for both military and literacy charities.