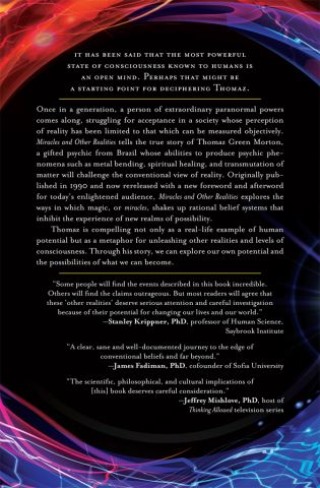 Miracles and Other Realities

The Paranormal Adventures of Thomaz Green Morton, the Most Powerful Psychic in the World

Once in a generation, a person of extraordinary psychic powers comes along. Miracles and Other Realities tells the true story of Thomaz Green Morton, a gifted psychic from the Minas Gerais region of Brazil.

Originally published in 1990 and now rereleased for a modern audience, Miracles and Other Realities recounts the fascinating story of Thomaz Green Morton and his powerful psychic abilities. This book will turn the heads of scientists, whose traditional acceptance of reality has been limited to that which can be measured objectively, and will introduce to a wider audience the power of mind over matter.

Thomaz’s story begins when he is struck by lightning on his twelfth birthday. This electrical insult to his body detonated a dazzling range of paranormal abilities. (Severe electric shock is, incidentally, common to the childhood experience of every major psychic.) Thomaz has since been called the most powerful psychic in the world. Driven by his mind to the farther reaches of reality to produce psychic phenomena such as metal-bending, spiritual healing, and transmutations of matter, Thomaz’s feats are well-documented by the authors. The story is all the more captivating because Thomaz is graced with a childlike emotional temperament, making him intent on living life to its fullest.

Coauthors Lee Pulos and Gary Richman explore through Thomaz the ways in which magic, or miracles, challenges the conventional view of reality, thereby shaking up rational belief systems that inhibit the experience of new realms of possibility. Readers will find Thomaz’s story compelling, not only as a real-life example of human potential but as a metaphor for unleashing other realities and levels of consciousness to tap into the potential within themselves.

Lee Pulos: Lee Pulos, PhD, is a clinical psychologist who has held clinical appointments at the Universities of Indiana, Wisconsin, and British Columbia. He is a naval veteran and professor emeritus at the University of British Columbia. Dr. Pulos is a past president of the Canadian Society of Clinical Hypnosis, and served as sports psychologist for Team Canada and Olympic athletes. He has published numerous professional articles and is the author of Beyond Hypnosis as well as an extensive audiobook series, The Power of Visualization. As a “psychic naturalist,” Dr. Pulos has traveled widely, gathering cross-cultural data on paranormal and healing phenomena in Brazil, Mexico, India, Africa, and the Philippines.|||Gary Richman was a freelance journalist who spent many years in Brazil studying spiritual healing, religion, and traditional folklore.