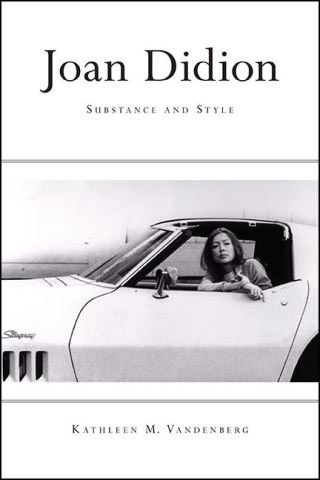 Much acclaimed and often imitated, Joan Didion remains one of the leading American essayists and political journalists of the twentieth and twenty-first centuries. The lone woman writer among the New Journalists in the 1960s and ’70s, Didion became a powerful critic of public and political mythologies in the ’80s and ’90s, and was an inspiration for those, particularly women, dealing with aging and grief and loss in the early 2000s. An iconic figure, Didion is still much admired by readers, critics, and essayists, who speak of looking to her prose style as a model for their own. In Joan Didion: Substance and Style, Kathleen M. Vandenberg explores how Didion’s nonfiction prose style, often lauded for its beauty and poetry, also works rhetorically. Through close readings of selected nonfiction from the last forty years—biographically, culturally, and politically situated—Vandenberg reveals how Didion deliberately and powerfully employs style to emphasize her point of view and enchant her readers. While Didion continues to publish and the “Cult of Joan,” as one author calls it, grows seemingly stronger by the day, this book is the only extended treatment of Didion’s later nonfiction and the first sustained and close consideration of how her essays work at the level of the sentence.