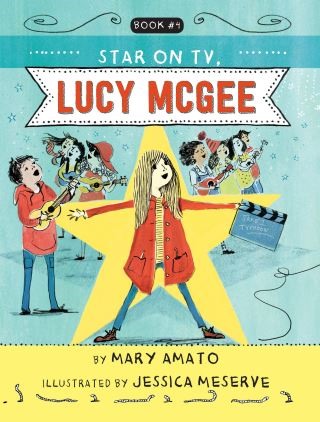 A Star on TV, Lucy McGee

A chance to be on TV brings out the worst in fourth grader Lucy McGee--and now her friends want her out of the Songwriting Club!

Lucy McGee and Phillip Lee are invited to perform a song on their school's morning show--this is their big break! First, they agree to keep it a secret from spotlight-stealing classmate Scarlett Tandy.

But what about the other members of the Songwriting Club? Lucy forgets to tell them, setting off a chain of hurt feelings, a disastrous secret party, a runaway brother, and much more. The loveable but impulsive Lucy will have to write a lot of apology letters before everything can go back to normal.

The delightful Lucy McGee series features a diverse cast of fourth and fifth grade characters who all love to sing and play the ukulele in the Songwriting Club; funny and sweet illustrations on every page; and song lyrics for aspiring musicians to try out on their own. Called "Ramona-esque" by the Bulletin of the Center for Children's Books, Lucy McGee is sure to be a reader favorite.

Mary Amato: Mary Amato writes fiction for children, such as the hilarious Riot Brothers series, but she is also a singer-songwriter who performs in the Washington, D.C. area. Her music can be heard on SoundCloud. In addition, she is a cofounder of Firefly Shadow Theater, a puppet company for which she writes and directs shows. Her novels have appeared on children's choice state award lists around the country. She lives in Hyattsville, Maryland.

Jessica Meserve has written and illustrated her own picture books, including Small Sister. She illustrated the Daisy Dawson series by Steve Voake as well as other books that have been published in the U.S. and UK. She was born in Maine and lives in England.