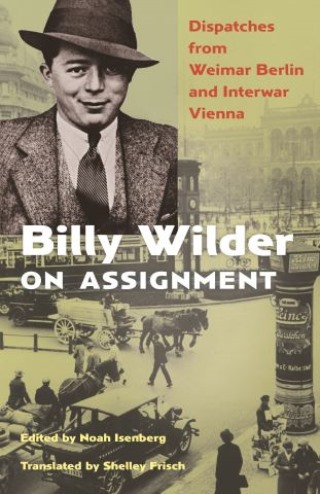 Before Billy Wilder became the screenwriter and director of iconic films like Sunset Boulevard and Some Like It Hot, he worked as a freelance reporter, first in Vienna and then in Weimar Berlin. Billy Wilder on Assignment brings together more than fifty articles, translated into English for the first time, that Wilder (then known as "Billie") published in magazines and newspapers between September 1925 and November 1930. From a humorous account of Wilder's stint as a hired dancing companion in a posh Berlin hotel and his dispatches from the international film scene, to his astute profiles of writers, performers, and political figures, the collection offers fresh insights into the creative mind of one of Hollywood’s most revered writer-directors.

Wilder’s early writings—a heady mix of cultural essays, interviews, and reviews—contain the same sparkling wit and intelligence as his later Hollywood screenplays, while also casting light into the dark corners of Vienna and Berlin between the wars. Wilder covered everything: big-city sensations, jazz performances, film and theater openings, dance, photography, and all manner of mass entertainment. And he wrote about the most colorful figures of the day, including Charlie Chaplin, Cornelius Vanderbilt, the Prince of Wales, actor Adolphe Menjou, director Erich von Stroheim, and the Tiller Girls dance troupe. Film historian Noah Isenberg's introduction and commentary place Wilder’s pieces—brilliantly translated by Shelley Frisch—in historical and biographical context, and rare photos capture Wilder and his circle during these formative years.

Filled with rich reportage and personal musings, Billy Wilder on Assignment showcases the burgeoning voice of a young journalist who would go on to become a great auteur.

Billy Wilder: Billy Wilder (1906–2002) wrote and directed Double Indemnity, The Lost Weekend, Sunset Boulevard, Some Like It Hot, and The Apartment, among other films. Over the course of his career, he won seven Academy Awards. Noah Isenberg is the George Christian Centennial Professor and Chair of the Department of Radio-Television-Film at the University of Texas at Austin. His many books include We'll Always Have “Casablanca” and Weimar Cinema. Twitter @NoahIsenberg Instagram @noah.isenberg1967 Shelley Frisch is the award-winning translator of Dietrich & Riefenstahl and the three-volume Kafka (Princeton), among other books. Twitter @shelfrisch