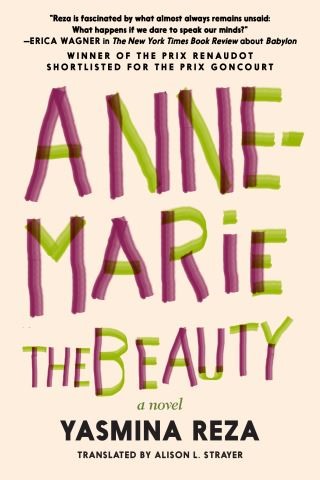 Another thought-provoking master class in how we perform life by the award-winning novelist and playwright Yasmina Reza.

"I was bored with my husband," says Anne-Marie, the irrepressible voice of Anne-Marie la Beauté, "but you know, boredom is part of love." Mostly she is speaking here of her more famous friend and colleague, the French actress Giselle Fayolle, in whose shadow she has spent her career. "My life was a near miss," she adds, before explaining that she enunciated well because "I loved to say the words." A very short novel with the power and resonance of a much longer one, Anne-Marie la Beauté is a profound and moving act of remembrance, a clear-eyed assessment of the hard-edged nature of fame, a meditation on aging--and a wonderfully observant and comic exploration of human foibles. In short, another thought-provoking master class in how we perform life by the peerless Yasmina Reza.

Yasmina Reza: Yasmina Reza is a novelist and playwright. Her plays Conversations After a Burial, The Unexpected Man, Art, Life x 3, and God of Carnage have all been multi-award-winning critical and popular international successes, translated into more than thirty-five languages. Art was the first non-English language play to win the American Tony Award. God of Carnage, which also won a Tony Award, was adapted for film in 2012 by Roman Polanski. Her novels include Babylon (Seven Stories, 2018), which won the Priz Renaudot and was shortlisted for the Prix Concourt; Desolation; and Adam Haberberg. Anne-Marie La Beauté is her most recent novel. She lives in Paris. Alison L. Strayer is a Canadian writer and translator. Her novel Jardin et prairie was shortlisted for Canada's Governor General's Award for Literature and the Grand Prix du livre de Montreal. Together with the French memoirist Annie Ernaux, Strayer won the Warwick Prize for Women in Translation and the French-American Translation Prize and was shortlisted for the International Man Booker Prize for her translation of Ernaux's The Years. Strayer's translation of Infidels by Abdellah Taïa was longlisted for the Albertine Prize, and her co-translation of Rencontres fortuites by Mavis Gallant was shortlisted for the Governor General’s Award for Translation. She lives in Paris.