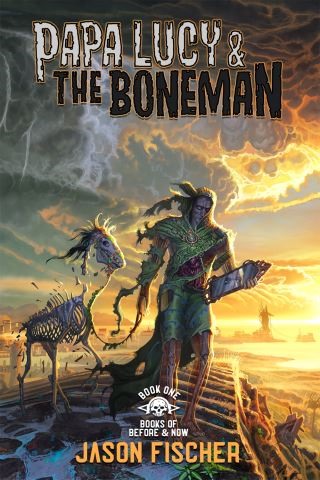 Papa Lucy saved the human race. He was a sorcerer, a lawmaker, a god. Papa Lucy led millions from the fires and destruction of the Before, into a savage new world known as the Now. Then, when the crops failed, when the livestock died, Papa Lucy gave hope. He gave civilisation to the broken leftovers of humanity, their minds wiped blank when they stumbled after him, through the secret places and out into the Now.Papa Lucy saved the human race. Papa Lucy lied.

Jason Fischer:
Jason Fischer is a writer who lives near Adelaide, South Australia. He has won the Colin Thiele Literature Scholarship, an Aurealis Award, and the Writers of the Future Contest. In Jason's jack-of-all-trades writing career he has worked on comics, apps, television, short stories, novellas, and novels. Jason also facilitates writing workshops, is an enthusiastic mentor, and loves anything to do with the written or spoken word. He also has a passion for godawful puns, and is known to sing karaoke until the small hours.