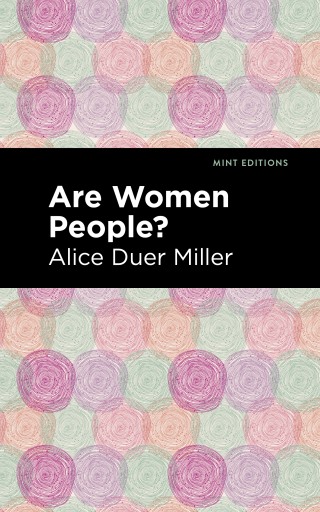 Are Women People? (1915) is a collection of poems by Alice Duer Miller. Inspired by her work as an activist for women’s suffrage, Miller published many of these poems individually in the New York Tribune before compiling them into this larger work. Focusing on the opposition of politicians and citizens alike, Miller makes a compelling case for the extension of voting rights to women across the nation. With her keen eye for hypocrisy and even keener ear for the rhythms of the English language, Alice Miller Duer crafts a poetry both personal and political. In “Representation,” she lampoons the notion that men’s votes and voices are capable of representing the viewpoints of the women in their lives: “My present wife’s a suffragist, and counts on my support, / […] / One grandmother is on the fence, the other much opposed, / And my sister lives in Oregon, and thinks the question’s closed; / Each one is counting on my vote to represent her view. / Now what should you think proper for a gentleman to do?” In these lighthearted lines, Miller satirizes the exclusion of women from American democracy, which inherently supposes that womanhood is monolithic, containing no opposing points of view. In “To President Wilson,” Miller excoriates the President for his focus on militarism and foreign policy, asking “How can you plead so earnestly for men / Who fight their own fight with a bloody hand; / […] and then / Forget the women of your native land?” Succinctly and convincingly, Miller makes her case for women’s suffrage. With a beautifully designed cover and professionally typeset manuscript, this edition of Alice Duer Miller’s Are Women People? is a classic of American literature reimagined for modern readers.

Alice Duer Miller (1874-1942) was an American novelist, poet, screenwriter, and women’s rights activist. Born into wealth in New York City, she was raised in a family of politicians, businessmen, and academics. At Barnard College, she studied Astronomy and Mathematics while writing novels, essays, and poems. She married Henry Wise Miller in 1899, moving with him in their young son to Costa Rica where they struggled and failed to open a rubber plantation. Back in New York, Miller earned a reputation as a gifted poet whose satirical poems advocating for women’s suffrage were collected in Are Women People? (1915). Over the next two decades, Miller published several collections of stories and poems, some of which would serve as source material for motion picture adaptations. The White Cliffs (1940), her final published work, is a verse novel that uses the story of a young women widowed during the Great War to pose important questions about the morality of conflict and patriotism in the leadup to the United States’ entrance into World War II.