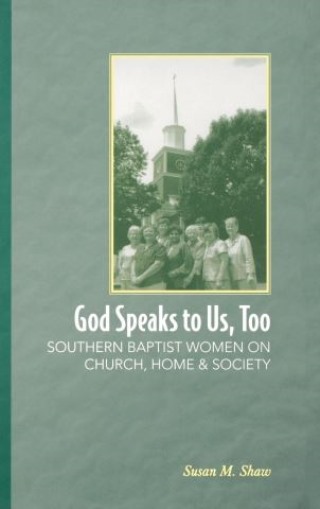 God Speaks to Us, Too

In God Speaks to Us, Too: Southern Baptist Women on Church, Home, and Society, Shaw presents her own experiences, as well as those of over 150 other current and former Southern Baptist women, in order to examine the role, identity, and culture of women in the largest Protestant denomination in the country. The Southern Baptist Convention was established in the United States in 1845 after a schism between Northern and Southern brethren over the question of slavery. Shaw sketches the history of the Southern Baptist faith from its formation, through its dramatic expansion following World War II, to the Controversy and its aftermath.

The Controversy began as a successful attempt by fundamentalists within the denomination to pack the leadership and membership of the Southern Baptist Convention (the denomination's guiding body) with conservative and fundamentalist believers. Although no official strictures prohibit a Southern Baptist woman from occupying the primary leadership role within her congregation—or her own family—rhetoric emanating from the Southern Baptist Convention during the Controversy strongly discouraged such roles for its women, and church leadership remains overwhelmingly male as a result. Despite the vast difference between the denomination's radical beginnings and its current position among the most conservative American denominations, freedom of conscience is still prized.

Shaw identifies "soul competency," or the notion of a free soul that is responsible for its own decisions, as the principle by which many Southern Baptist women reconcile their personal attitudes with conservative doctrine. These women are often perceived from without as submissive secondary citizens, but they are actually powerful actors within their families and churches. God Speaks to Us, Too reveals that Southern Baptist women understand themselves as agents of their own lives, even though they locate their faith within the framework of a highly patriarchal institution. Shaw presents these women through their own words, and concludes that they believe strongly in their ability to discern the voice of God for themselves.