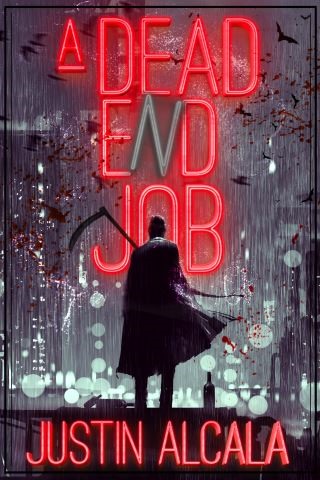 Fans of Terry Pratchett and Shane Kuhn’s THE INTERN’S HANDBOOK will love this noir supernatural thriller.

Death needs a vacation. Badly. But there’s a catch: There are people who cheat the system, always falling through the cracks and not dying like they’re supposed to. Who’s going to take care of them while Death’s sipping on sangria?

The answer is simple: Death needs an intern, and it doesn’t take a rocket scientist to realize that one prospect, Buck Palasinksia—a bankrupt hitman with a roleplaying addiction—might have what it takes. While scoping out his next target, Buck gets drilled in the forehead by a bullet and falls right into Death’s lap.

If they shove him back into his body, he’ll have a few weeks to prove that he has what it takes to be Death’s right-hand.

All he has to do is take out Public Enemy No. 1, John Dillinger, and quit smoking.

Justin Alcala: Justin Alcala is a novelist, nerdologist and Speculative Literature Foundation Award Finalist. He’s the author of four novels including Consumed, (BLK Dog Publishing) The Devil in the Wide City (Solstice Publishing) Dim Fairy Tales (AllThingsThatMatterPress) and A Dead End Job (The Parliament House). His short stories have been featured in dozens of magazines and anthologies, including It Snows Here (Power Loss Anthology),The Offering (Rogue Planet Press Magazine) and The Lantern Quietly Screams (Castabout Literature). When he’s not burning out his retinas in front of a computer, Justin is a tabletop gamer, blogger, folklore enthusiast and time traveler. He is an avid quester of anything righteous, from fighting dragons to acquiring magical breakfast eggs from the impregnable grocery fortress. Most of Justin’s tales and characters take place in The Plenty Dreadful universe, a deranged supernatural version of the modern world. When writing, Justin immerses himself in subject matter, from stuffy research to overseas travel. Much to the chagrin of his family, he often locks himself away in his office-dungeon, playing themed music over, and over, and over again. Justin currently resides with his dark queen, Mallory, their malevolent daughter, Lily, changeling son, Ronan, hellcat, Misery and hound of Ragnarök, Fenrir. Where his mind might be though is anyone’s guess.