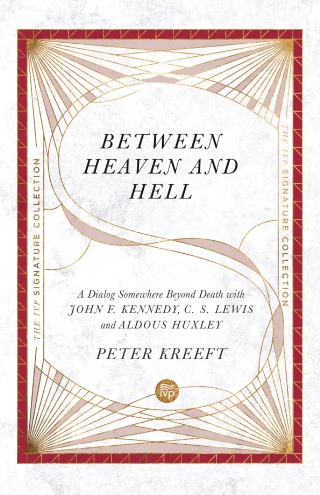 Between Heaven and Hell

On November 22, 1963, three great men died within a few hours of each other: C. S. Lewis, John F. Kennedy and Aldous Huxley. All three believed, in different ways, that death is not the end of human life. Suppose they were right, and suppose they met after death. How might the conversation go? Peter Kreeft imagines their discussion as part of the great conversation that has been going on for centuries about life's biggest questions. Does human life have meaning? Is it possible to know about life after death? What if one could prove that Jesus was God? With Kennedy taking the role of a modern humanist, Lewis representing Christian theism and Huxley advocating Eastern pantheism, the dialogue is lively and informative. With clarity and wit, Between Heaven and Hell presents insightful responses to common objections to the Christian faith. This classic apologetics work is now available as part of the IVP Signature Collection, which features special editions of iconic books in celebration of the seventy-fifth anniversary of InterVarsity Press.

Peter Kreeft: Peter Kreeft (PhD, Fordham University) is professor of philosophy at Boston College, where he has taught since 1965. A popular lecturer, he has also taught at many other colleges, seminaries, and educational institutions in the eastern United States. Kreeft has written more than fifty books, including The Best Things in Life, The Journey, and Handbook of Christian Apologetics (with Ronald Tacelli).