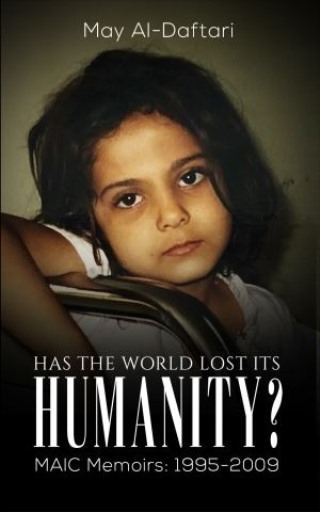 Has the World Lost Its Humanity?

Has the World Lost Its Humanity? offers an original and unique perspective of
events during the darkest period of Iraq’s modern history.
The book is based on the author’s personal and professional experience as director of the charity Medical Aid for Iraqi Children, MAIC.
Through her fifteen years work at MAIC, May shares fascinating insight on the effects of UN sanctions on the daily life of Iraqis. She also explores issues rarely discussed before: the complex process of liaising with sanction departments in London and New York and she highlights the problems the charity encountered in the process.
May describes emotionally her visits to children’s hospitals in Iraq and the children’s tragic suffering where even basic medical needs were mostly unavailable.
The book also narrates heart-warming stories of ordinary people from all walks of life, offering selfless sacrifices to provide support to the Iraqi children.
Academics, historians and the general public would find this book very informative and interesting.

May Al-Daftari: May Al-Daftari was born in Baghdad and lived in Beirut and London. Currently, she is living in Amman. She is a graduate of the American University of Beirut (AUB) with a bachelor’s degree in Economics and is a holder of master’s degree in Area Studies from the School of Oriental and African Studies (SOAS), London. She was chief editor of the Arab Gulf Journal, a biannual between 1981–1987 and a founding member and director of the British charity, Medical Aid for Iraqi Children (MAIC) from 1995 until 2009. She is the author of Issues in Development: The Arab Gulf States, London 1980 and Yassin Al-Hashimi, Biographical Recollections, Amman 2017 (published in Arabic).