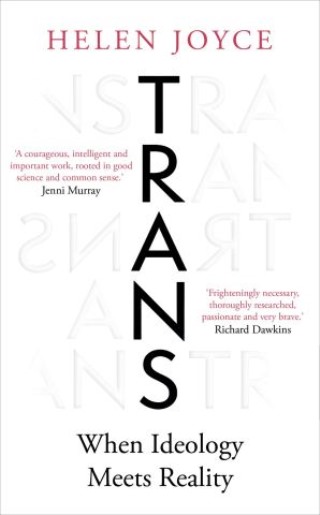 'In the first decade of this century, it was unthinkable that a gender-critical book could even be published by a prominent publishing house, let alone become a bestseller.' Louise Perry, New Statesman

Gender identity ideology is about more than twitter storms and using the right pronouns. In just ten years, laws, company policies, school and university curricula, sport, medical protocols, and the media have been reshaped to privilege self-declared gender identity over biological sex.

People are being shamed and silenced for attempting to understand the consequences of redefining ‘man’ and ‘woman’. While compassion for transgender lives is well-intentioned, it is stifling much-needed inquiry into the significance of our bodies.

If we recommit to our liberal values of freedom of belief, freedom of speech and robust debate, we scan de-escalate this most vicious of culture wars.

Helen Joyce: Helen Joyce is The Economist’s Britain editor, where she has held several senior positions, including Finance editor and International editor. Before joining The Economist in 2005 she edited Plus, an online magazine about mathematics published by the University of Cambridge. She has a PhD in mathematics from University College London. Since becoming interested in gender-identity ideology, she has written for several outlets on the subject. On Twitter, she is @HJoyceGender.