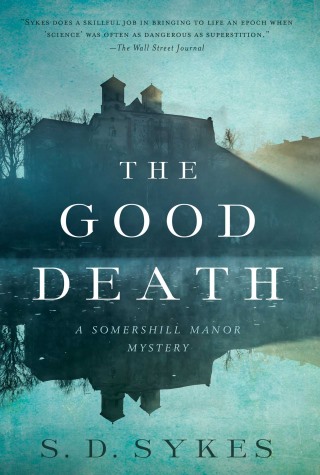 In the new Somershill Manor mystery, Lord Oswald de Lacy makes a devastating confession to his dying mother. But will he gain the forgiveness he seeks, or destroy his family?

England, November 1370. Oswald de Lacy, Lord of Somershill Manor, makes a devastating confession to his dying mother. But will he gain the forgiveness he seeks—or destroy his family?

In 1349, Oswald, the third son of the de Lacy family, was an eighteen-year-old novice monk at Kintham Abbey. Sent to collect herbs from the forest, Oswald comes across a terrified village girl. Frenzied with fear, she runs headlong into a swollen river. Oswald pulls her broken and bruised body from the water and returns her to the local village, only to discover that several other women have disappeared. A heinous killer is at work, but because all of the missing women come from impoverished families without influence, nobody seems to care.

Oswald vows to find this killer himself—but as plague approaches, his beloved tutor Brother Peter insists they must stay inside the monastery. He turns instead to the women of the village for help, and particularly the enigmatic and beautiful Maud Woodstock—a woman who provokes strong emotions in Oswald.

As he closes in on the killer, Oswald makes a discovery that is so utterly shocking that it threatens to destroy him and his family. Even as plague rages across England and death is at every door, Oswald must kill or be killed. And the discovery will be a secret that haunts him for the rest of his life.

S. D. Sykes: S. D. Sykes is the author of Plague Land, The Butcher Bird, City of Masks, and The Bone Fire, all available from Pegasus Crime. She lives in England.