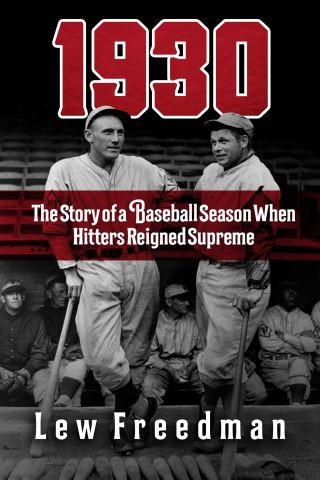 The Story of a Baseball Season When Hitters Reigned Supreme

The 1930 Major League baseball season was both marvelous and horrendous, great for hitters, embarrassing for pitchers. In totality it was just this side of insane as an outlier among all seasons.

Major League Baseball began with the founding of the National League in 1876. In the 145 seasons since then, one season stands out as unique for the astounding nature of hitting: 1930.

A flipside of 1968’s “Year of the Pitcher,” when the great St. Louis Cardinals Bob Gibson compiled a 1.12 earned run average and Detroit Tigers Denny McLain won 31 games, the 1930 season was when the batters reigned supreme. During this incredible season, more than one hundred players batted .300, the entire National League averaged .300, ten players hit 30 or more home runs, and some of the greatest individual performances established all-time records. From New York Giants Bill Terry’s .401 average—the last National Leaguer to hit over .400—to the NL-record 56 home runs and major league–record 192 runs batted in by Chicago Cubs Hack Wilson, the 1930 season is a wild, sometimes unbelievable, often wacky baseball story.

Breaking down the anomaly of the season and how each team fared, veteran journalist Lew Freeman tells the story of a one-off year unlike any other. While the greats stayed great, and though some pitchers did hold their own—with seven winning 20 or more games, including 28 by Philadelphia Athletics’ Lefty Grove and 25 by Cleveland Indians’ Wes Ferrell—Freedman shares anecdotes about those players that excelled in 1930, and only 1930. More than ninety years later, 1930 offers insight into a season that still stands the test of time for batting excellence.

Lew Freedman: Lew Freedman is the author of nearly sixty books on sports, including Clouds over the Goalpost, The Original Six, and A Summer to Remember, and is the winner of more than 250 journalism awards. A veteran sportswriter, Freedman was formerly a staff writer for the Chicago Tribune and Philadelphia Inquirer, as well as other papers, and lives in Columbus, Indiana.