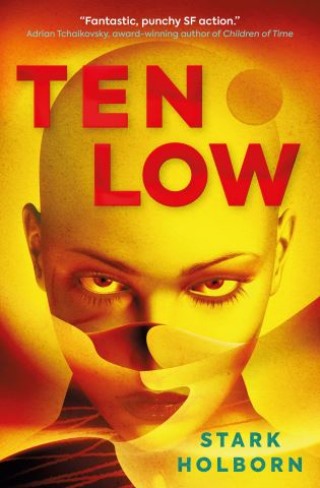 Firefly meets Dune in a breakneck race to escape across an alien moon thriving with aliens and criminals.


Ten Low is eking out a living at the universe’s edge. An ex-medic, ex-con, desperate to escape her memories of the war, she still hasn’t learnt that no good deed goes unpunished.

Attempting to atone for her sins, she pulls a teenage girl from a crashed lifecraft. But Gabriella Ortiz is no ordinary girl – she is a genetically-engineered super soldier and decorated General, part of the army that kept Ten prisoner. Worse, Ten realises the crash was an assassination attempt, and that someone wants Ortiz dead...

To get the General off-world, they must cross the moon’s lawless wastes, face military hit squads, savage bandits, organ sharks and good old-fashioned treachery. But as they race to safety, something else waits in the darkness. Something ancient and patient. Something that knows exactly who she is, and what she is really running from.

Stark Holborn: Stark Holborn is a novelist, games writer, film reviewer, and the author of Nunslinger and Triggernometry and has worked on games and interactive fiction such as Shadow of Doubt (Colepowered Games) and Mars 2020 (BBC). Stark lives in the South West UK.