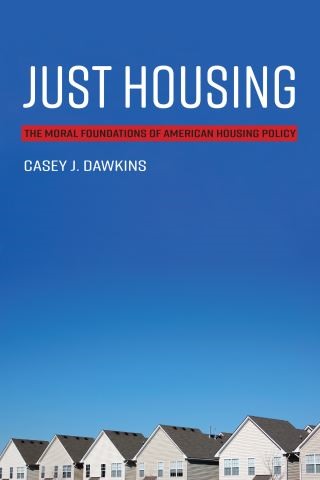 A new conception of housing justice grounded in moral principles that appeal to the home’s special connection to American life.

In response to the twin crises of homelessness and housing insecurity, an emerging “housing justice” coalition argues that America’s apparent inability to provide decent housing for all is a moral failing. Yet if housing is a right, as housing justice advocates contend, what is the content of that right? In a wide-ranging examination of these issues, Casey Dawkins chronicles the concept of housing justice, investigates the moral foundations of the US housing reform tradition, and proposes a new conception of housing justice that is grounded in moral principles that appeal to the home’s special connection to American life.
Dawkins examines the conceptual foundations of justice and explores the social meaning of the American home. He chronicles the evolution of American housing reform, showing how housing policy was pieced together from layers of housing and land-use policies enacted over time, and investigates the endurance—from the founding of the republic through the postwar era—of the owned single-family home as the embodiment of national values. Finally, Dawkins considers housing justice, drawing on elements of liberalism, republicanism, progressivism, and pragmatism to defend a right-based conception of housing justice grounded in the ideal of civil equality. Arguing that any defense of private property must appeal to the interests of those whose tenure is made insecure by the institution of private property, he proposes a “secure tenure” property regime and a “negative housing tax” that would fund a guaranteed housing allowance.

Casey J. Dawkins: Casey J. Dawkins is Professor of Urban Studies and Planning and Affiliate of the National Center for Smart Growth at the University of Maryland. He is coauthor of The Social Impacts of Urban Containment.