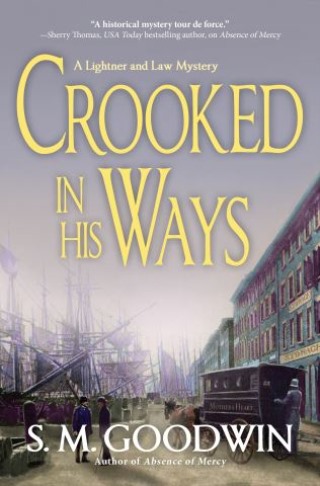 Crooked in His Ways

A Lightner and Law Mystery

Perfect for fans of C. S. Harris and Will Thomas, the murder of a wealthy financier unleashes a torrent of deadly secrets in pre-Civil War New York society in S. M. Goodwin's second book in the Lightner and Law mysteries.

Albert Beauchamp disappeared just before Christmas in 1856. When he reappears more than a year later, he's in several pieces, packed in salt in a shipping crate in New Orleans. NYC inspectors Jasper Lightner and his partner, Hieronymus Law, are called in to investigate--but the further they dig into the wealthy financier's background, the dirtier the story gets. On the surface, Beauchamp had a lot of friends. But, as they discover, each had a good reason to hate him.

Beauchamp's last will and testament--stashed away in a safety deposit box, along with a king's ransom in jewels--yields few clues, but Jasper and Hy discover something even more valuable: a little black book filled with names, dates, and a cache of damning details.

Following a trail of leads that reaches back to the early 1840s, the detectives uncover a sordid litany of high society scandals that still threatens the city's moneyed establishment. And the shadowy figure who knows their dirtiest secrets re-emerges with a devious new plan that goes far beyond simple blackmail.

The dark shadows grow longer as Jasper and Hy close in on the truth--and a killer lies in wait for his ultimate prey.