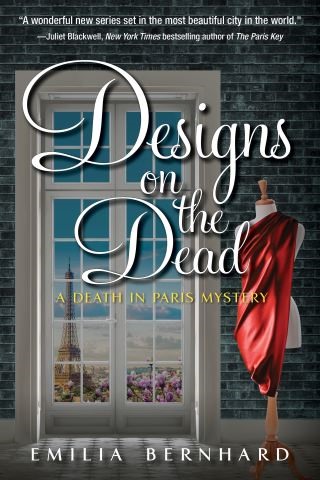 Designs on the Dead

In Paris, some are dying for the latest fashion...others will kill for it.


Having successfully solved two murders in the City of Lights, self-proclaimed private detectives Rachel Levis and Magda Stevens are ready to take on the world. Or at least the 3rd arrondissement. Which is good news when renowned fashion designer Roland Guipure is found lifeless outside his own birthday party in that upscale neighbourhood, dead from an apparent overdose.


Rachel thinks its murder, and when it turns out the police agree, the two Americans roll up their sleeves for another murder investigation. And there are plenty of suspects: the angry assistant designer promoted to the top spot as a result of Guipure’s death; the lovelorn PA who was crushed by the designer's lack of interest in her; the former boyfriend who lost his meal ticket as a result of Guipure’s successful stay in rehab. Not to mention that the designer's murder occurred a few days before that of an American tourist who seems to be connected to him in some mysterious way. Paris is beginning to feel crowded with corpses. Coincidence or just bad luck?


As the clues and suspects pile up, Rachel and Magda rush to find the murderer before another death is cut from the same cloth.

Emilia Bernhard: Emilia Bernhard is an American living in England. She's imagined being an actress, a wedding planner, a spy, and a liberal icon, but she's only ever dreamt of being a novelist. Born in Philadelphia, she lived in Iowa, Massachusetts, Arkansas, London, Cambridge, and Exeter before settling in Bristol, where she lives with her cat, Robert Southey.