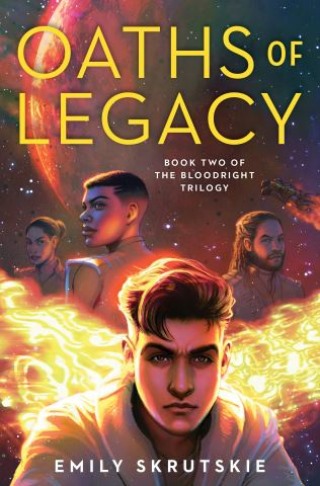 Book Two of The Bloodright Trilogy

Torn between loyalty and love, a young prince will learn how much he's willing to sacrifice as he tries to destroy the rebellion that threatens his throne in the exhilarating sequel to Bonds of Brass.

Gal’s destiny has always been clear: Complete his training at the military academy, prove his worth as a royal successor, and ascend to the galactic throne. When a failed assassination plot against Gal sends him and Ettian—his infuriatingly enticing roommate—on a mad dash through the stars, Gal’s plans are momentarily disrupted. But he was born to rule the Umber Empire, and with Ettian by his side, nothing will stop him from returning home and crushing the growing insurgency threatening his family’s power.

Yet nothing is ever that simple in war—or in love. Gal is captured by the rebellion during a skirmish and faces public execution, his grand fate cut short. To save Gal’s life, Ettian does the unthinkable: He reveals himself as the secret heir to the fallen Archon Empire and rightful leader of the rebellion . . . and, therefore, Gal’s sworn enemy. Now a political hostage in this newly reignited conflict, Gal must use his limited resources to sabotage the rebellion from within, concoct an escape plan, and return to the empire he’s destined to lead. And if that means taking down the man he thought he loved?

Emily Skrutskie: Emily Skrutskie was born in Massachusetts, raised in Virginia, and forged in the mountains above Boulder, Colorado. She attended Cornell University and now lives and works in Los Angeles. Skrutskie is the author of Bonds of Brass, Hullmetal Girls, The Abyss Surrounds Us, and The Edge of the Abyss.