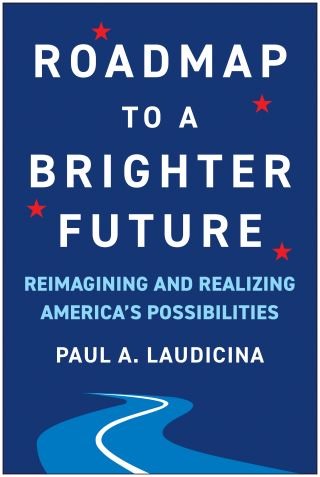 Roadmap to a Brighter Future

America's best days should still lie ahead. Here’s the realistic and definitive path to get us there.

The future doesn’t just happen. It’s a choice that we can and must help determine. But as our deeply divided nation reels from converging crises and seemingly intractable discord, where do we begin when the stakes are unfathomably high?

With multiple possible futures before us, Americans need to understand the specific consequences of our immediate choices, seize the opportunity to renew the nation's promise, and set the stage to benefit current and future generations. If we chart our course correctly, we can emerge from our current troubles with a brighter future in reach of all Americans.

Based on decades of expertise in envisioning and articulating policy options, Paul Laudicina lays out four vastly different visions for America's future. In Roadmap to a Brighter Future, he outlines why the best version of America will only come about if the correct actions are taken now—and outlines the ten steps needed to decisively tackle our most pervasive problems and address critical priorities.

Laudicina, who led one of the world's most-respected management consultancies and has worked as a longtime senior advisor to Joe Biden, also integrates the uncensored views and fresh ideas of dozens of the world's leading thinkers, CEOs, scientists, government leaders, and innovators, to show why optimism about the United States is not only warranted, but crucial.

Paul A. Laudicina: Paul Laudicina is chairman emeritus of Kearney, one of the world's largest strategy consulting firms, and founder of its Global Business Policy Council, a top-ranked think tank helping CEOs and government/civil society leaders anticipate and rise to the challenge of navigating a transformed world.  Earlier in his career, he served as then-Senator Joe Biden's legislative director, and as founder of the policy division of SRI International (the former Stanford Research Institute).  Laudicina is also the author of several books and a CEO coach working with Korn Ferry, the world’s leading executive search, human resources, and leadership development firm. Consulting Magazine, which regularly named him to its ranking of the Top 25 most influential consultants, awarded Laudicina its Lifetime Achievement Award in 2019—the profession's highest honor.  He divides his time between Santa Fe, New Mexico and Scottsdale, Arizona; his office in Washington, DC; and client sites and podiums across five continents.