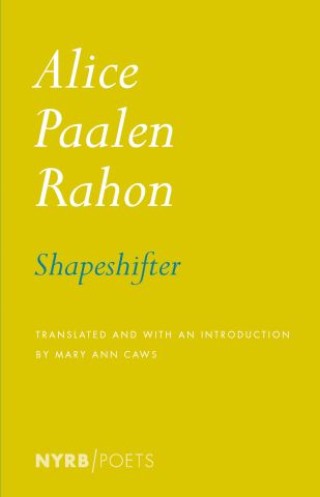 Poetry by one of the most powerful female figures in twentieth-century surrealism, now collected in English for the very first time.

Alice Paalen Rahon was a shapeshifter, a surrealist poet turned painter who was born French and died a naturalized citizen of Mexico. Her first husband was the artist Wolfgang Paalen, among her lovers were Pablo Picasso and the poet Valentine Penrose, and over the years her circle of friends included Frida Kahlo and Diego Rivera, Joan Miró, Paul Éluard, Man Ray, and Anaïs Nin. This bilingual edition of Rahon’s poems confirms the achievement of this little-known but visionary writer who defies categorization. Her spellbinding poems, inspired by prehistoric art, lost love, and travels around the globe, weave together dream, fantasy, and madness. For the first time in any language, this book gathers the three collections of poetry Rahon published in her lifetime, along with uncollected and unpublished poems and an album of portraits, manuscript pages, and artworks.

Alice Paalen Rahon: Alice Paalen Rahon (1904–1987), born Alice Marie Yvonne Phillipot, was a surrealist painter and poet. Raised in Paris, she became involved in the city’s surrealist subculture in the 1920s and married the Austrian surrealist painter Wolfgang Paalen in 1934. She and Wolfgang traveled to North and Latin America in the late 1930s, and settled in Mexico in 1940. Rahon wrote three books of poetry and contributed to the surrealist journal Dyn. After divorcing and remarrying, Rahon remained in Mexico City, adopting elements of its landscape, culture, and symbolism in her visual work. She stopped painting in the late 1970s and lived much of her later years in seclusion.

Mary Ann Caws is a distinguished professor emerita of the French, English, and Comparative Literature PhD programs at the Graduate School of the City University of New York. Specializing in Dada and surrealism and the Bloomsbury group, she is the author of many volumes on literature and art, including illustrated biographies of writers and painters. Her most recent publications include The Modern Art Cookbook, Creative Gatherings: Meeting Places of Modernism, and The Milk Bowl of Feathers: Essential Surrealist Texts. A translator of several poets and an editor of several anthologies, she was the chief editor of The HarperCollins World Reader.