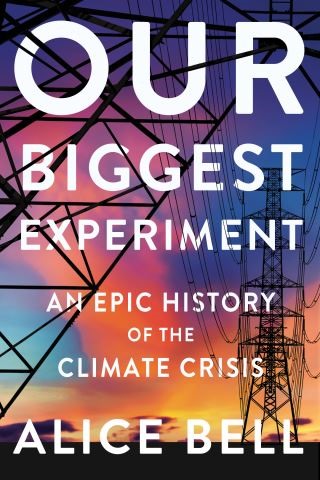 An Epic History of the Climate Crisis

Traversing science, politics, and technology, Our Biggest Experiment shines a spotlight on the little-known scientists who sounded the alarm to reveal the history behind the defining story of our age: the climate crisis.

Our understanding of the Earth's fluctuating environment is an extraordinary story of human perception and scientific endeavor. It also began much earlier than we might think. In Our Biggest Experiment, Alice Bell takes us back to climate change science's earliest steps in the eighteenth and nineteenth centuries, through the point when concern started to rise in the 1950s and right up to today, where the “debate” is over and the world is finally starting to face up to the reality that things are going to get a lot hotter, a lot drier (in some places), and a lot wetter (in others), with catastrophic consequences for most of Earth's biomes.

Our Biggest Experiment recounts how the world became addicted to fossil fuels, how we discovered that electricity could be a savior, and how renewable energy is far from a twentieth-century discovery. Bell cuts through complicated jargon and jumbles of numbers to show how we're getting to grips with what is now the defining issue of our time. The message she relays is ultimately hopeful; harnessing the ingenuity and intelligence that has driven the history of climate change research can result in a more sustainable and bearable future for humanity.

Alice Bell: ALICE BELL is a climate campaigner and writer based in London. She co-runs the climate change charity Possible, working on a range of projects from community tree planting to solar-powered trains. She has a PhD in science communication from Imperial College London and a BSc in the history of science from University College London, and has worked as both an academic and journalist, writing about everything from the radical science movement of the 1970s to plastic recycling in labs.