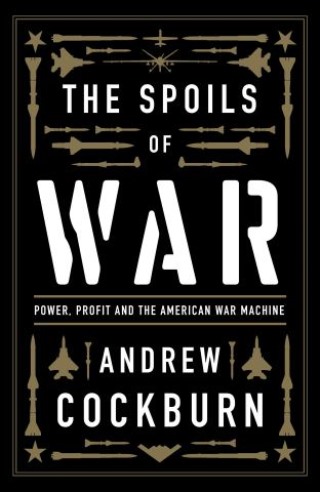 The Spoils of War

Why Does America Go to War?

In the last decades, America has gone to war as supposed defenders of democracy. The War on Terror was waged to protect the west from the dangers of Islamists. US Solders are stationed in over 800 locations across the world to act as the righteous arbiters of the rule of law. In What The Spoils of War Andrew Cockburn brilliantly dissects the intentions behind Washington's martial appetites.

The American war machine can only be understood in terms of the "private passions" and "interests" of those who control it - principally a passionate interest in money. Thus, as he witheringly reports, Washington expanded NATO to satisfy an arms manufacturer's urgent financial requirements; the U.S. Navy's Pacific fleet deployments were for years dictated by a corrupt contractor who bribed high-ranking officers with cash and prostitutes; senior marine commanders agreed to a troop surge in Afghanistan in 2017 "because it will do us good at budget time."

Based on years of wide-ranging research, Cockburn lays bare the ugly reality of the largest military machine in history: squalid, and at the same time terrifyingly dangerous.

Andrew Cockburn: Andrew Cockburn is the Washington Editor of Harper's magazine and the author of many articles and books on national security, including the New York Times Editor's Choice Rumsfeld and The Threat, which destroyed the myth of Soviet military superiority underpinning the Cold War and Kill Chain: Drones and the Rise of High-Tech Assassin. He is a regular opinion contributor to the Los Angeles Times and has written for, among others, the New York Times, National Geographic and the London Review of Books.