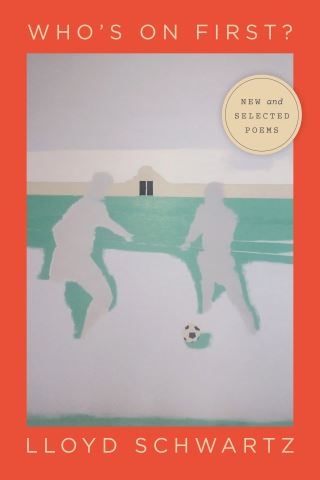 For more than four decades, readers and critics have found Lloyd Schwartz’s poems unlike anyone else’s—a rare combination of the heartbreaking and the hilarious. With his ear for the poetry of the vernacular, Schwartz offers us a memorable cast of characters—both real and imagined, foolish and oracular. Readers experience his mother’s piercing flashes of memory, the perverse comic wisdom of Gracie Allen, the uninhibited yet loving exhibitionists of antique pornography, and eager travelers crossing America in a club-car or waiting in a Brazilian airport. Schwartz listens to these people without judging—understanding that they are all trying to live their lives, whenever possible, with tenderness, humor, and grace.

Who’s on First? brings together a selection of poems from all of Schwartz’s previous collections along with eagerly awaited new poems, highlighting his formal inventiveness in tangling and untangling the yarn of comedy and pathos. Underlying all of these poems is the question of what it takes and what it costs to make art.

Lloyd Schwartz: Lloyd Schwartz is the Frederick S. Troy Professor of English Emeritus at the University of Massachusetts Boston, a longtime commentator on classical music and the arts for National Public Radio’s Fresh Air, and a noted editor of Elizabeth Bishop’s poetry and prose. He has been awarded the Pulitzer Prize for Criticism, Guggenheim and National Endowment for the Arts fellowships in poetry, and the poet laureateship of the city of Somerville, Massachusetts. His poems have appeared in the New Yorker, New Republic, and Atlantic. Among his poetry books are Little Kisses, Cairo Traffic, and Goodnight, Gracie, all published by the University of Chicago Press.