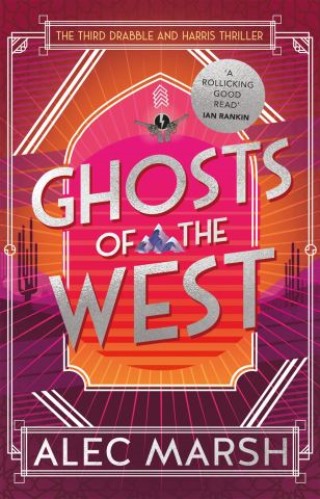 Ghosts of the West

This third novel in the Dabble and Harris thrillers is perfect for fans of action-packed, historical fiction.

When daring journalist Sir Percival Harris gets wind of a curious crime in a sleepy English town, he ropes in his old friend Professor Ernest Drabble to help him investigate.

The crime is a grave robbery, and as Drabble and Harris pry deeper, events take a mysterious turn when a theft at the British Museum is soon followed by a murder.

The friends are soon involved in a tumultuous quest that takes them from the genteel streets of London to the wide plains of the United States. What exactly is at stake is not altogether clear - but if they don't act soon, the outcome could be a bloody conflict, one that will cross borders, continents and oceans...

Meanwhile, can Drabble and Harris's friendship - which has endured near-death experiences on several continents, not to mention a boarding school duel - survive a crisis in the shape of the beautiful and enigmatic Dr Charlotte Moore?

'Told with humour and flair, Enemy of the Raj is a highly enjoyable, riveting read'
ABIR MUKHERJEE

'Tremendous stuff! With the arrival of Alec Marsh's first Drabble and Harris thriller, John Buchan must be stirring uneasily in his grave'
STANLEY JOHNSON

Alec Marsh: Alec Marsh was born in Essex in 1975. He graduated from Newcastle University with a first class degree in history. Beginning his career on the Western Morning News in Cornwall, he went on to write for titles including the Daily Telegraph, Daily Mail, The Times and London Evening Standard. In 2008 he was named an editor of the year by the British Society of Magazine Editors. He is now the editor of Spear's Magazine, a title focused on luxury lifestyle. He is married and lives with his family in west London.