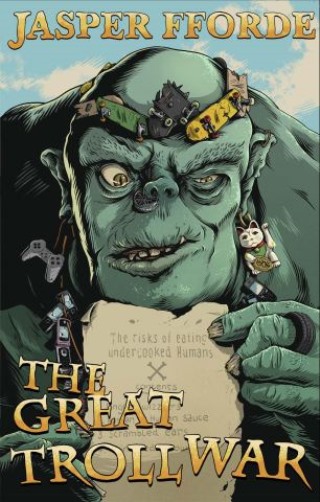 The final instalment of the Last Dragonslayer Chronicles, demonstrating that with a small band of committed followers, a large tin of resolve and steely determination, almost anything can be achieved . . .

Sixteen-year-old Jennifer Strange and her sidekick and fellow Orphan Tiger Prawns have been driven to the tip of the UnUnited Kingdoms - Cornwall - by the invasion of the Trolls. Their one defence is a six-foot-wide trench full of buttons, something which the Trolls find unaccountably terrifying (it's their clickiness).

Worse than being eaten by Trolls is the prospect of the Mighty Shandar requisitioning the Quarkbeast and using him to achieve supreme power and domination - an ambition that has been four hundred years in the planning and which will ultimately leave the Earth a cold cinder, devoid of all life.

Nothing has ever looked so bleak, but Jennifer, assisted by a renegade vegan Troll, a bunch of misfit sorcerers, the Princess (or is she now the ruler?) of the UnUnited (or are they now United?) Kingdoms, and Tiger, must find a way to vanquish the most powerful wizard the world has ever seen, and along the way discover the truth about her parents, herself, and what is in the locked glovebox of her VW Beetle . . .

Jasper Fforde spent twenty years in the film business before debuting on the New York Times bestseller list with The Eyre Affair in 2001. Since then he has written another fifteen novels, including the Number One Sunday Times bestseller One of our Thursdays is Missing, and the Last Dragonslayer series, adapted for television by Sky.

Fforde lives and works in his adopted nation of Wales.