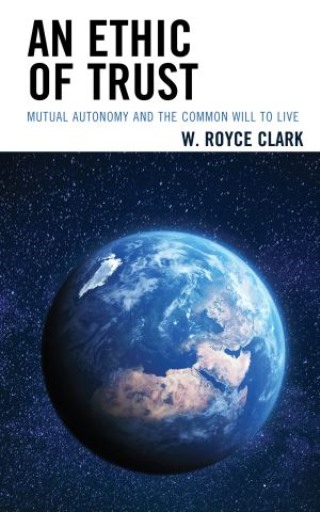 An Ethic of Trust

Mutual Autonomy and the Common Will to Live

The proximity of many different religions, each with its own unique metaphysics and ethics, did not exist in the ancient world when those religions came into existence. Many went uncontested for centuries, and many merged with governments to shape the laws for the entire people of a culture or nation. Theocracies can exist only where there is no plurality of religions or where the minor religions do not mind the dominant one dictating policy for all citizens. In the word’s two greatest democracies, the U.S. and India, despite the diversity that a democratic society presupposes, a majoritarian religion continues to assert an advantage over others to shape the social contract.

An Ethic of Trust: Mutual Autonomy and the Common Will-to-Live addresses this problem, moving beyond sheer utilitarianism. W. Royce Clark argues that because of religious pluralism, a nation’s ethic must be grounded on “freestanding” principles. This means that its base must be universally obvious, and its principles must be agreeable to all citizens. The base is instinctual, the “will-to-live” which is present in all living creatures, and the recognition of that can influence people to agree to a voluntary unity and a couple of other basic principles to which all would agree, principles which embrace differences within relationships, whether in a marriage or a constitutional republic. But to voluntarily agree to these requires a genuine mutual trust and mutual autonomy which can maximize unity while allowing individual liberties.

To arrive at this point, Clark blends scholars who are often cast as opposites—Albert Schweitzer, Friedrich Nietzsche, and John Rawls—to forge a new path for an inclusive ethic for a nation, within which both the religious and non-religious will have equal freedom and stability.